Attracting major cultural or sports events is much more art than science. That said, the detailed development of a workable plan that meets your own goals for return-on-investment and the granting organization’s desire for a showcase program requires attention to detail, creativity and a thorough understanding of the actual requirements.

In the international sports field, the International Olympic Committee’s “Agenda 2020″ reform program in December 2014 has changed the bid process, not only for the Olympic Games, but for all major competitions in the Olympic Movement.

Thus, today’s bids must be both engaging and sensible. The research and presentation of a myriad of details can obscure your message of hospitality, quality organization and world-class facilities, especially when time is short or the bid process itself is burdensome. The key is to stay focused: on message, on time and on budget.

This is where support from an experienced bid packager, writer and producer can help. Perelman, Pioneer & Co. has been honored to work on numerous bids and presentations for a variety of major programs, providing careful fact gathering and checking, assertive writing and coordination of graphic production requirements into quality documents and presentations. Our goal is always to (1) meet or exceed the bid requirements and (2) find ways to showcase the qualities of our clients while staying within the boundaries set by the recipient’s rules and procedures. Examples include:

The ownership group for the Los Angeles Marathon decided to bid for the 2016 U.S. Olympic Marathon Trials during the summer of 2013, but had not begun a draft with just more than two weeks to go before the submission deadline. 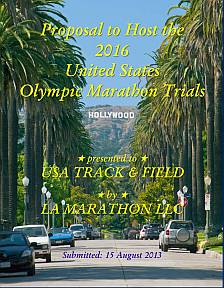 Perelman, Pioneer was engaged to create the written bid in 14 days, including production of hard copies to be mailed to the USA Track & Field office in Indianapolis, Indiana; a PDF copy of the bid to be e-mailed, and on DVDs to be distributed further.

The 60-page, full-color bid book was produced on time and on budget, and Los Angeles was selected as the 2016 U.S. Olympic Marathon Trials site.

≡ Bid to be the U.S. Applicant City for the 2012 Olympic Games

Over an 18-month period, an 839-page bid was assembled in four volumes, weighing a total of 22 pounds. The bid was submitted ahead of the due date and while colorful and informative, was produced primarily on photocopiers to lower costs, allow easy assembly and maximize flexibility in presentation right up to the last possible moment prior to submission.

Although the Los Angeles was not ultimately selected, the bid documents were adjudged to be among the best submitted.

This bid was developed for the Los Angeles Sports Council and the City of Pasadena, site of the Rose Bowl stadium that was proposed to host the NFL’s championship game.

Although the bid incorporated full-page, high-impact color photography and was presented in two hard-bound volumes, it was produced for much less than had been anticipated and helped successfully present the area’s offer of creative financing, excellent facilities and superior support programs that brought Super Bowl XXVII to Southern California.